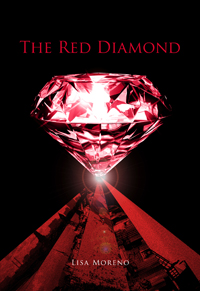 When coastal fog rolls in with a vengeance, Malibu locals know better than to walk its sandy shores alone at night; yet, CLARISSA STANFORD, deeply troubled by her boyfriend’s unsolved murder and the untold secret behind it, runs unabashedly into the menacing fog naive to its eerie foreboding.

Expect to be kept fastened to your seat as this high-octane story winds you through the treacherous paths of those in pursuit from the heart of the United States to the banking vaults of Zurich and ultimately to Moscow. Greed has a stiff price tag and murder crisscrosses all paths leading to the Red Diamond.

With more than 25 years of experience as a Graduate Gemologist, guest lecturing at multiple universities across California in her discipline, and appearing as an expert in stones on cable television, educator Lisa Moreno understands the science, mystery and lore of gemstones. After writing two poetry books and two other mystery novels, she was determined to write this intriguing cloak and dagger story which intertwined gems. “Writing about colored diamonds is the top of the diamond hit parade,” she says. “What could be more fascinating?” She and husband Richard live in the foothills of Southern California.